Yet the vernal equinox was blessed with a calm yellow warmth, an opalescent sea, the clamour of birdsong and the excitement of emerging bees. Our days have lengthened quickly and now we are running headlong towards the white nights of June. These are days to savour because of that and because we know the long hours of summer light are short-lived. 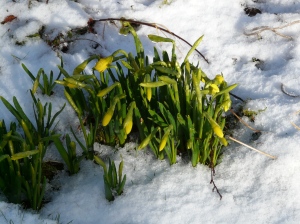 Daffodils and crocuses are scattered about the garden. They have coped well with Winter’s reluctant leave-taking and endured the snow and ice thrown repeatedly at them by cruel winds in biting showers. And we have all been rewarded for such stoicism: with warm lemon drizzle, blue porcelain skies, heaped white cushion-clouds and seas that have shimmered in turquoise and coral.

At long last the ground has warmed enough to shake sleepers into life. Insects have emerged to dance along the still-full ditches and across the sodden croft fields, and frog spawn shimmers in the bog pools. 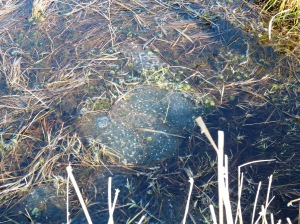 For just a few days there was enough sunny warming for the sandy soils closest to the river to dry out a little. Quartz grains sparkled in the bare patches and the bed-stones of the Red River glowed as the low waters tumbled past.

The birds are filled with Spring joy; they are busy with nest building, singing and squabbling. Before the sun rises one voice greets everyone from the top of the hawthorn tree. A thrush, dressed in his speckled waistcoat, chest thrust proudly forward, fills his lungs and almost bursts open with his music. Through my open bedroom window I’m convinced the whole world must hear him. He sings for nearly an hour before he is joined by myriad other voices, roused into action, ready for the day.

At the equinox we all paused. Day met night to shake hands, everywhere was quiet, even Master Thrush waited until, at some unseen signal, the Earth shifted and lifted her head towards the sun, and the singing began once more. Now others have joined the warming, churning airs: bees have awoken and they too are adding their busy thrumming to the music.

Citrus-yellow, marzipan scented gorse flowers are opening so the clumps of furze along the river bank appear to be speckled with bright paint. In the fields bright green spears are slowly emerging, pointing fiercely towards the sun. In hedges buds are unfurling and catkins are opening. Everywhere, it seems, is an Easter rising.

Hello there. I'm a mother, grandmother, writer, crofter & Professor of Physical Geography specialising in ‘environmental change'. I live on a smallholding known as a 'croft'. The croft is close to the sea and surrounded by the ‘Great Wilderness’ mountains of the NW Highlands. I was a fulltime mother, then a full-time academic living and working in north-west England. In 2013 we decided to try and live a smaller, simpler, wilder life in the remote mountain and coastal landscapes of Wester Ross. When I was a young researcher, I spent time in the Highlands of Papua New Guinea living with indigenous communities there. They taught me about the interconnectedness and sacredness of the living world. After having my four children I worked in universities continuing my research and teaching students about environments, landform processes and landscape change. Eventually, after 12 years, I moved away from the rigours of scientific writing, rediscovered my wilder self and turned to nature non-fiction writing. My work has been published by Elliott & Thompson in a series of anthologies called 'Seasons' and I have essays in several editions of the highly acclaimed journal ‘Elementum’, each one partnered with artworks by contemporary artists. I also still work with former colleagues and publish in peer-reviewed academic journals. I am currently writing a book about this extraordinary place which will be published by Harper Collins.
View all posts by Annie O'Garra Worsley →
This entry was posted in environment, experiencing nature, nature, Spring, wildlife and tagged birds, bumble bees, croft, Easter, gorse flowers, Spring equinox, thrush. Bookmark the permalink.