Washing and drying along the river bank

As it trickled through the recent days of heat our ‘Red River’ reddened, becoming shallower, its music softer. The Abhain Dearg took on the colour of old blood and its stones and pebbles shone in rust and bronze. Some of the larger boulders shimmered, ancient armour dropped by warriors in ages past, while banks of smaller pebbles and stones seemed to vibrate like the skin of a sleeping serpent hiding from the sun. 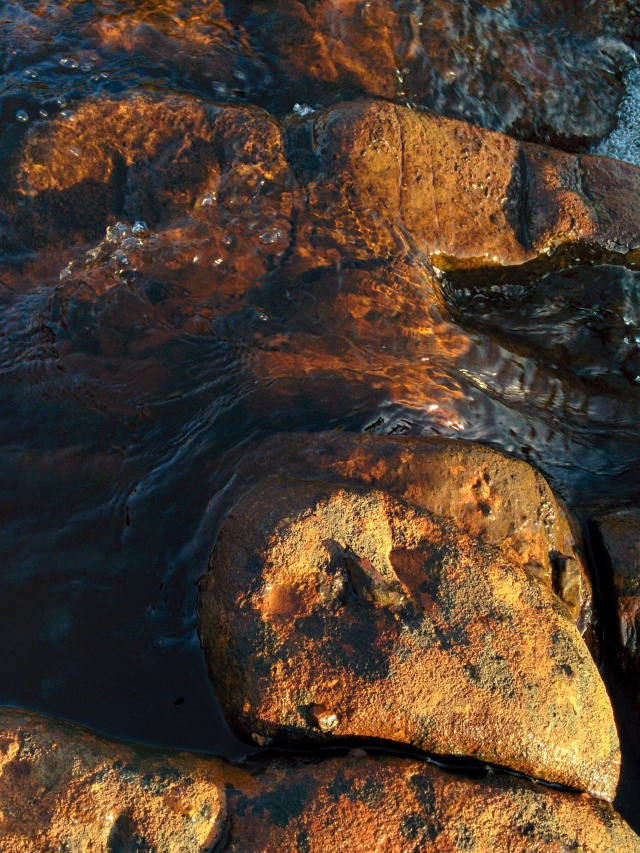 Here and there exposed sandy banks dried out and quickly became dusty, though their dry crispness was a joy to walk across after the sogginess of winter. In deeper pools, shaded by overhanging heather or myrtle and overlooked by low branches of birch or willow, dark water slurped and fish squiggled lazily.

There is a low point along the riverbank, a ford which has been used for decades, a crossing place for animals and a good spot for them to drink. Deer footprints are often visible when the sands are wet and spraint or crab claws, left on large boulders, mark the passage of otters along the river. But for a short time the water was only finger deep and this normally busy place was quiet and almost completely still but for a few slithering, satiny ripples.  In the heat cloven imprints had slumped into ghostly shapes like craters on Mars seen through a old telescope while bone and shell fragments twinkled white and pink in the shrivelled, crusty spraint. Our spring had become summer.

But in the Highlands we are at the mercy of Atlantic trickery; the winds swung back to the west, rolling up great swathes of sopping cloud, hauling them landwards to chase away the transient try-hard summer. Strangely the breezes died as they came ashore and for a time the air was completely still. I looked out across the fields; the trees were motionless as an unusual calmness settled about us all. Rain poured in vertical ribbons. (I can’t tell you how unusual this is.) Here rain always comes from the side, sneaking up coat sleeves and down collars. No matter how we wear hats or hoods our sideways-flowing coastal showers will wash our faces and hide our tears. But this is different. Oh, the wind will return, of that there is no doubt, but for a brief interlude I needed to look up to wet my face. 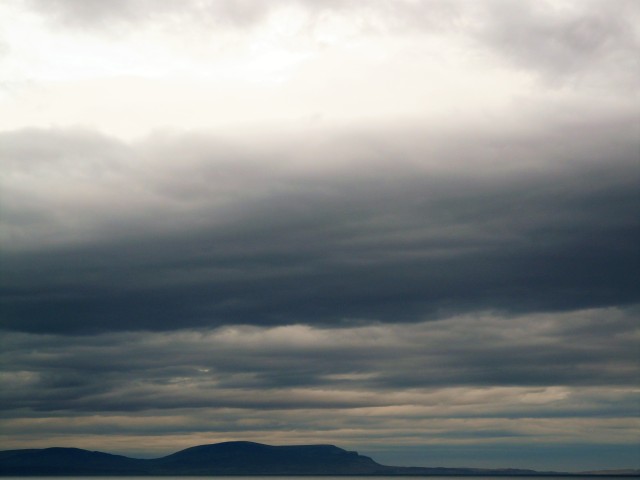 Birdsong resonated around the river valley in the ‘non-wind’. There was surprise in the voices as well as melody and gossip. Raindrops sploshed and plinked on leaves and branches. This was new music; leaves chimed instead of rustling, tinkled with laughter instead of whispering, and glistened like a million fairy mirrors. 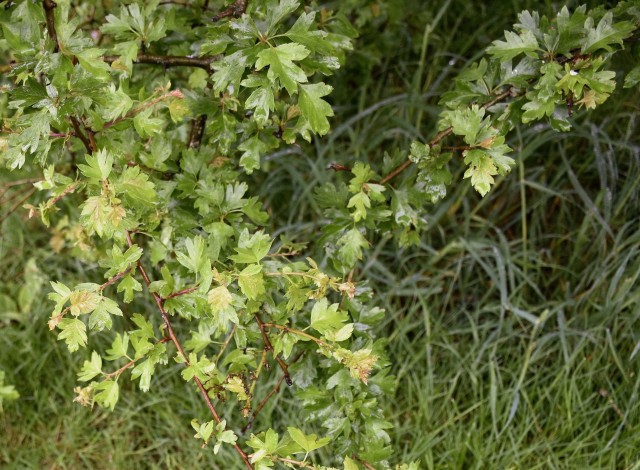 The river rose steadily as waters made their way from hill top down to the sea; more rust-red than blood-red, churning and foaming. On the banks, dry sand was soaked and began to glow deeply and pulse with light while at the ford the ghostly Martian hoof-prints were smoothed away.

Just as swiftly the winds returned and the low-slung drag of grey was replaced by high piles of luminescent white clouds, cauliflower heads rapidly rising thousands of feet into the deep blue, then strengthening and thickening to become Thor’s anvils. Beneath the billowing and rolling, narrow bands of black and white rippled across the mountains while we at the coast squinted in the rising and reflective brilliance of the sun. So swiftly does the spring weather change that we are laundered by it all, in scented soakings and fragrant tumble dryings.

How am I, how is anyone, supposed to keep calm in all this magic?

Hello there. I'm a mother, grandmother, writer, crofter & Professor of Physical Geography specialising in ‘environmental change'. I live on a smallholding known as a 'croft'. The croft is close to the sea and surrounded by the ‘Great Wilderness’ mountains of the NW Highlands. I was a fulltime mother, then a full-time academic living and working in north-west England. In 2013 we decided to try and live a smaller, simpler, wilder life in the remote mountain and coastal landscapes of Wester Ross. When I was a young researcher, I spent time in the Highlands of Papua New Guinea living with indigenous communities there. They taught me about the interconnectedness and sacredness of the living world. After having my four children I worked in universities continuing my research and teaching students about environments, landform processes and landscape change. Eventually, after 12 years, I moved away from the rigours of scientific writing, rediscovered my wilder self and turned to nature non-fiction writing. My work has been published by Elliott & Thompson in a series of anthologies called 'Seasons' and I have essays in several editions of the highly acclaimed journal ‘Elementum’, each one partnered with artworks by contemporary artists. I also still work with former colleagues and publish in peer-reviewed academic journals. I am currently writing a book about this extraordinary place which will be published by Harper Collins.
View all posts by Annie O'Garra Worsley →
This entry was posted in Uncategorized and tagged Abhainn Dearg, Heat, landscape, Red River, river, Spring, summer, weather, wilderness. Bookmark the permalink.

3 Responses to Washing and drying along the river bank