A short, blast of extreme weather in the Highlands recently brought flooding and a heat wave; and lots of midges.

These wildly fluctuating conditions light up the landscape with flashing colour and humming vibrancy, as if the end-of-summer days must be expended fully and immediately or all the energy will be lost. Locals and tourists dash about attempting to capture sunsets, sunrises, cloud formations, mountain vistas and seascapes and making the most of the heady warmth and bright daylight in between showers. Wildlife is busy: gathering, feeding, testing flight feathers ahead of migration or, like the passage migrants already en route, refuelling in our meadows and down at the shore. It is a time of abundance but there is also a sense of urgency; there’s much to do.

Of course, as soon as the storm fled east, losing itself somewhere in the North Sea, Scottish schools reopened after their summer break.  (Funnily enough I remember going back to school clutching my new, sweet-smelling pencils in weather hot enough to bake a cake in.) But there we are, late summer sunshine, mind-bending light shows to greet each day and evening and in between them really decent, sit-on-your-bottom-sandcastle-building weather.

High on the moors and mountains the heather is in full bloom; for some estates grouse shooting is underway. As I walk up the valley the purples seem to glow with electricity and pulse in time with my heartbeat. 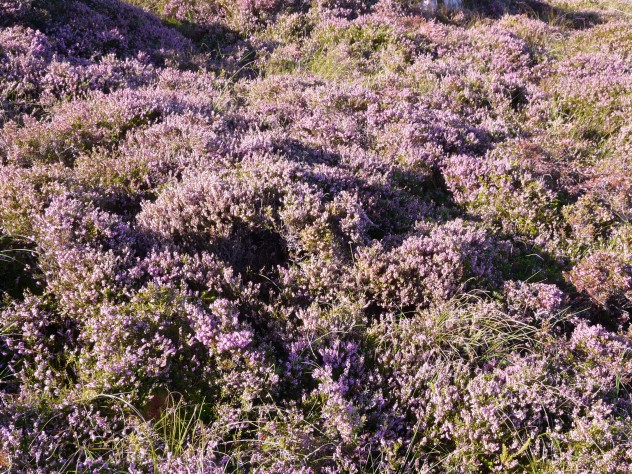 At this time of year even the cinnamon and frankincense of bog myrtle is overwhelmed by aromas rising from heathers. I can taste pears steeped in red wine; yes, if I lick my lips the usual saltiness that comes with living in close proximity to the sea has been replaced by syrup. As I walk I wonder whether novice hunters on grouse moors feel strange, shooting birds while surrounded by such heady scents and eye-aching colours. How can anyone concentrate with the single-minded determination required to shoot when there is so much colour and life, and so much joy in the purple blooming?

Bright mauve and violet flowers hum with insect life, their fragrances are both dizzying and effervescent and invite you in: come walk through me, taste the air, sip the wine, listen to the singing. Years ago I stood at the great doors of Notre Dame in Paris. The aromas of incense seeped out; I stepped inside and was overwhelmed by a sudden burst of sound, for the choirs and congregation were singing. My eyes adjusted, the gloom of the doorway was replaced by fluorescing colours from the great stained-glass windows as sunshine poured through them. Now, whenever I step into full blooming heather on a hot, late-summer’s day, that same sense of surprise, awe and wonder returns.

Somehow the heady mixture of scents, lights and sounds slows everything and everyone down; like the bees we become intoxicated. Back home I feel headachy from the heavy, humming, scented air but I can’t complain; instead I open the croft-house windows and let it all in and, as gentle purple breezes waft through the rooms, my headache drifts away. Following the lazy air currents buzzing insects pass slowly through the house too, and with an occasional helping hand or gentle waft of a tea-towel I guide them safely outside.

From my windows I can see the heather stretching down from the high moors to the shore. Purples mix with green though as I wash the dishes I become aware that now many of the tufted grasses have copper and gold coloured tips. Finishing up I head out, making my way to the sea.  The coastal heather is interspersed with machair grassland and sphagnum-myrtle peatbog in a patchwork quilt of micro-habitats. This edgeland, where the sea meets earth, rock and river-waters, is very attractive to wildlife. It is here that I feel a sense of ‘wildness’ most often and it is where the recent harvest-moon-storm wrought mayhem yet brought considerable bounty.

While the Red River flooded in response to torrential rain, at sea the waves were black and white and angry; they furled and flashed and spat grit and salt. Now and again sea merged with sky into a single wall of grey steel that groaned and wailed and buckled as if resisting the urgent pushing of an unseen giant’s hand beyond it. When the flailing anger had subsided, waves, still tall and aquamarine, were filled with seaweeds, ropes, wood, branches, clumps of soil with grassy turf still attached and plastic (always the plastic). Offshore kelp meadows were shredded by storm waves and roiling currents. Swollen burns and rivers had ripped up turf and carried fallen branches down to the sea. Waves, almost solid with debris, then churned steadily landwards.

As is the way with intense summer tempests heat and shimmering sunshine quickly returned. The waves diminished and left huge mounds of steaming debris. Kelp and other seaweeds, mingled with the myriad bodies of tiny fish, shellfish, crabs and other creatures, began to decay and shrivel. Soon clouds of flies descended. 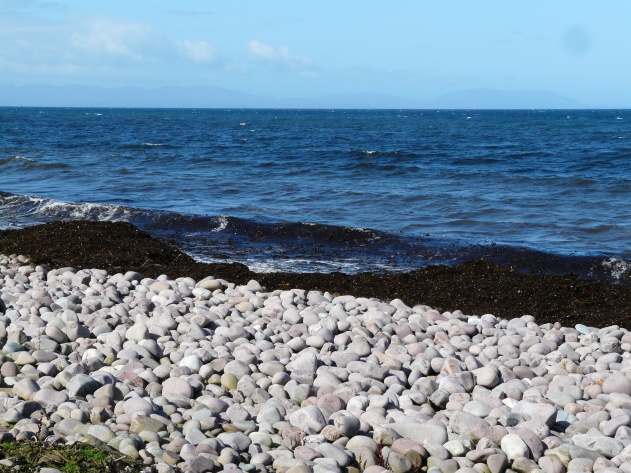 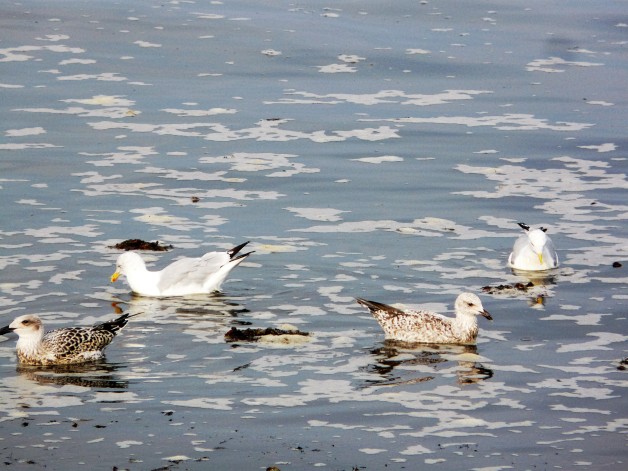 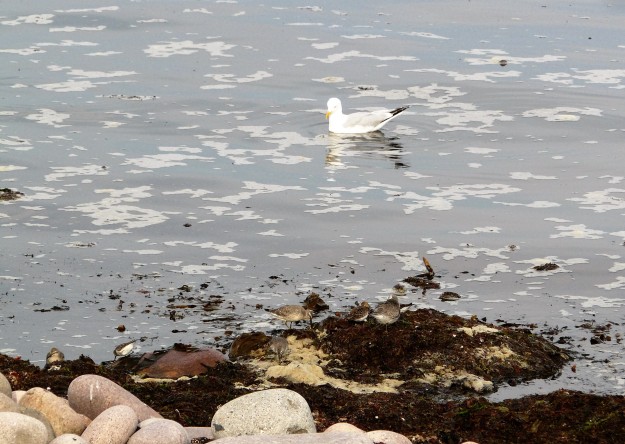 With each incoming high tide the piles were rolled over and over in long thick tangles exposing and uncovering new food supplies. At every tidal retreat the sea birds dispersed and meadow pipits, skylarks, wrens, pied and grey wagtails flew down from the heather and meadows to pick at the drying remains of kelp, fish and insects.

All around the coast the numbers of sea birds have risen dramatically not only because of the storm but also because great shoals of mackerel have returned. For some months we have been puzzled at low bird numbers: warming seas, climate change, overfishing have all been discussed by fisher-folk and wildlife experts alike. Out in the deep waters of The Minch whale and dolphin spotting tour boats have captured images of large cetaceans but in the shallow coastal waters we have been dismayed by the lack of birds. Over the summer on our little sandy beach ringed plovers and oystercatchers have successfully bred and reared young but in general sea bird numbers have been poor. And in the sheltered, wooded bay and island at Sheildaig the heronry has been noisy and busy all season. Yet we have all felt a great sense of relief seeing the returning flocks of gannets enjoying the mackerel, the gull gangs squabbling and squawking as they scavenged in the debris and at the timely delivery of so much bounty for the large numbers of passage migrants.

Here on this narrow strip of untamed ground and coastal water the survival of wildlife hangs in the balance, competition for resources is fierce and death never far away.  It is hard not to think of storms as always destructive and yet our shore and coastal waters were reenergised by a short, sharp bout of summer temper.

So as I head to the shore, camera, binoculars and bird book ready, with note book, pencils, art-pad, paints and brushes stashed in my bag, I’m excited and laugh at how wickedly beautiful and utterly wild this place is. 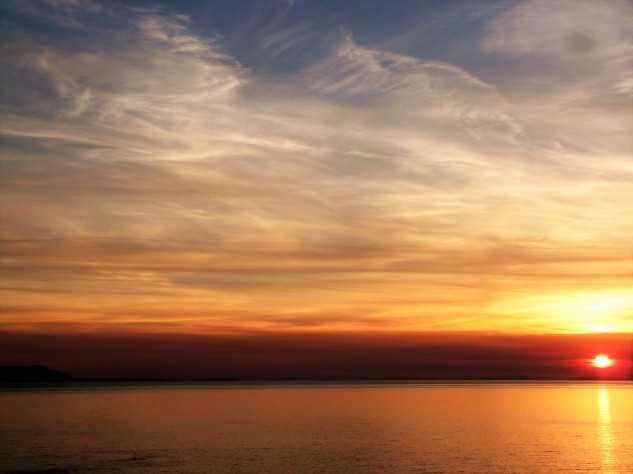 Hello there. I'm a mother, grandmother, writer, crofter & Professor of Physical Geography specialising in ‘environmental change'. I live on a smallholding known as a 'croft'. The croft is close to the sea and surrounded by the ‘Great Wilderness’ mountains of the NW Highlands. I was a fulltime mother, then a full-time academic living and working in north-west England. In 2013 we decided to try and live a smaller, simpler, wilder life in the remote mountain and coastal landscapes of Wester Ross. When I was a young researcher, I spent time in the Highlands of Papua New Guinea living with indigenous communities there. They taught me about the interconnectedness and sacredness of the living world. After having my four children I worked in universities continuing my research and teaching students about environments, landform processes and landscape change. Eventually, after 12 years, I moved away from the rigours of scientific writing, rediscovered my wilder self and turned to nature non-fiction writing. My work has been published by Elliott & Thompson in a series of anthologies called 'Seasons' and I have essays in several editions of the highly acclaimed journal ‘Elementum’, each one partnered with artworks by contemporary artists. I also still work with former colleagues and publish in peer-reviewed academic journals. I am currently writing a book about this extraordinary place which will be published by Harper Collins.
View all posts by Annie O'Garra Worsley →
This entry was posted in coasts, environment, experiencing nature, landscape, nature, peatbogs, photography, river, sea, storm, wilderness, wildlife and tagged birds, kelp, nature, sea, seabirds, seaweeds, shoreline, summer storm, The Minch, waves, weather, Wester Ross, wild, wilderness, wildlife. Bookmark the permalink.