Spring surf, seals and a selkie

The last of the unusually calm weather has passed. Normal service has been resumed with strong westerlies forging ahead of cloud banks smeared across the Outer Hebrides. Spring has retreated to the low hill behind me and dithers in patches of crisp sunshine. The winds are as twisted and tough as old dried heather stems; they bite and scrape at soft skin, moaning gleefully. At least the contortions of these old plants once aimed for the sun; the rasping breezes are fickle and directionless and pummel everything.

For a time yesterday sky and sea were no longer separate entities. They slid across one another in a fusion of mercury and silver. Rain fell in steel rods; colour was leached from the ground. What had been effervescent and Irn-Bru-orange on moorland became soggy-biscuit-dipped-in-tea-beige while hints of pea-green in our meadows sank into war-torn khaki. Even the burned toast patchiness of rock and heather on the hills merged into smooth darkness like grinds at the bottom of a coffee pot.

After more overnight rain the Red River filled and rushed to the sea in an avenue of ringing sound. Small burns that normally sneak down adjacent hillsides under and through heather clumps shone in ivory ribbons. On reaching the lower meadows they darkened becoming dull and full of peat and soil fragments, twigs and other dirty debris. The rising peat-bog’s water table swelled iron-black pools to pearlescent plashes. When it finally stopped raining the mire’s surface was prickled with chalk-white brightness like a paper doily held up to the sun light whose beams slip through the punctured patterns. Flickering motion made the whole bog seem alive.

Strangely, despite the buffeting winds and roving showers there was little movement in the slight curve of Opinan bay until a dark grey shape rose through the milling wavelets. A seal. Then another. I counted eight in total. Their smoky faces were accompanied by sea birds: gulls, divers, even the tufted head of a merganser.  The birds bobbed along as if made of paper, origami creatures set afloat on a puddle. It is not uncommon to see a single seal basking in these waters on a calm early morning, head back and whiskers shining, but it is unusual for a large team to visit, especially in wilder weather. They have been here for over a week now. I had thought the turbulence and changing wave direction would drive them away, back to the shelter of Sheildaig perhaps, but no, they still seem to be taking advantage of the safe swimming and presumably good fishing.

I am jealous of their ability to ‘hang’ vertically even in choppy waters. I loved to swim in a rough sea and jump through big breakers as a child, and I still do. There is something comforting about being stirred about in a giant sea water pot that scrambles and fizzes against your skin. It is deeply cleansing and invigorating. And as I watched the seals from the dunes, well wrapped against the sand and salt filled wind, I was certain they were relishing their jacuzzi. Yes, there was no doubt in my mind, the seals were enjoying themselves.

Out in the rough corridor between the mainland and Hebrides a pewter ship reflected the sunlight that was nibbling at clouds. Its bow was bouncing hard, white foam breaking high upon the prow. Looking through binoculars I could see helicopters on its deck like lice on salmon and bright orange lifeboats fastened tight to its sides, glistening in the spray like the closed-up anemones on rocks at low tide. NATO have been playing war games along the west coast so there would be more ships out at sea but from my vantage point they were hidden from view in the silver salted air. Two jets flew across the mountains ripping through clouds and bludgeoning their way through the winds.

Local fishermen and wildlife cruise operators report that whales and dolphins disappear when war games begin or when the nuclear-powered submarines slip by. Perhaps this is the reason for seals in our bay; they do not want to play war.

Today the clouds are breaking. I cannot see any big ships. White crowns are shining on the waves and where they break open rainbow spray jets upwards. At the rocky coast below the croft the sea has been whipped into a growling, curdled grey-green porridge. Overhead bonxies fly. They have returned to nest and they skim along our cliffs sailing north then south as they hunt. Stonechats are playing marbles; I can even hear them above the noise of wind and breaking waves; they cling to wavering stems of heather or old, tough grasses that bend first one way, then another in the gusts. 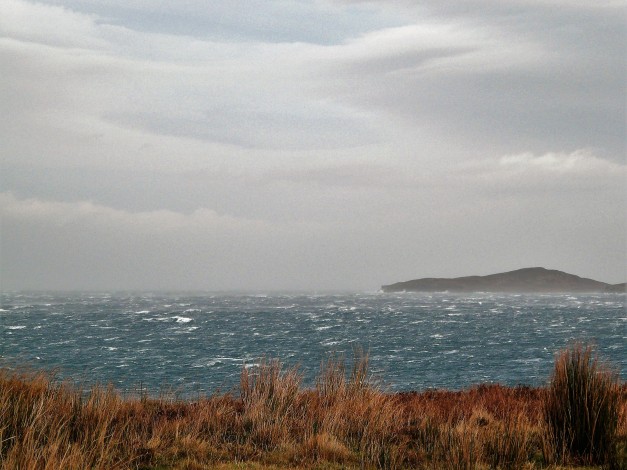 What was pewter and steel grey yesterday is now mother-of-pearl and pale, milky turquoise. Sea and sky have parted though any conversation between them is loud and crinkled with moss-green waves spilling in from the west. There is more porcelain-white foam spurting across the sands and rollers are the colour of courgettes, flecked and shiny. At first I think the seals have gone but then I spot one and I soon realise they are all still here. They are diving through surf, splashing into breakers, twisting and turning, up and down, with an occasional glance shore-ward to see what humans and dog are doing.

I am immediately thrust back to my childhood holidays. I wanted to swim in all weathers and I usually did. My mother, wrapped in her coat, a wool scarf fastened tightly under her chin, clutching my towel, would watch and wait even in rain. I, wearing a black swimming costume, head in a white rubber cap, would dive through the crashing surf, gasping and choking on sea water, laughing with glee, skin red from cold and salt and sand chafing, not wanting the wild fun to end.

Hello there. I'm a mother, grandmother, writer, crofter & Professor of Physical Geography specialising in ‘environmental change'. I live on a smallholding known as a 'croft'. The croft is close to the sea and surrounded by the ‘Great Wilderness’ mountains of the NW Highlands. I was a fulltime mother, then a full-time academic living and working in north-west England. In 2013 we decided to try and live a smaller, simpler, wilder life in the remote mountain and coastal landscapes of Wester Ross. When I was a young researcher, I spent time in the Highlands of Papua New Guinea living with indigenous communities there. They taught me about the interconnectedness and sacredness of the living world. After having my four children I worked in universities continuing my research and teaching students about environments, landform processes and landscape change. Eventually, after 12 years, I moved away from the rigours of scientific writing, rediscovered my wilder self and turned to nature non-fiction writing. My work has been published by Elliott & Thompson in a series of anthologies called 'Seasons' and I have essays in several editions of the highly acclaimed journal ‘Elementum’, each one partnered with artworks by contemporary artists. I also still work with former colleagues and publish in peer-reviewed academic journals. I am currently writing a book about this extraordinary place which will be published by Harper Collins.
View all posts by Annie O'Garra Worsley →
This entry was posted in coasts, environment, experiencing nature, landscape, myth, nature, peatbogs, photography, river, sea, Spring, walking, weather, wilderness, wildlife and tagged coast, NATO, seals, Spring, weather, wildlife, wildness. Bookmark the permalink.

4 Responses to Spring surf, seals and a selkie