July is a month of flickering, in and out, up and down. Heat and searing light give way to cooler silvery days filled with midges and mists, the latter gently spreading diamonds on leaves and flowers, in and out, up and down. Look closely and a pristine copy of the world appears in each spherule of water. Then as temperatures rise invisible ribbons of perfume waft through layers of steam and every once in a while they are so thick I’m sure I glimpse a rainbow tendril or two. The urge to stop and breathe them in as slowly as possible, savouring the taste and feeling the essence of life seep deep inside, is almost impossible to ignore. For few brief moments sweet scented energy passes from alveoli into arteries and mixes joy with red blood. And like a drug, I can’t get enough of it.

Bright sunshine and heat have brought fierce blue skies so deep and clear that the very edges of space have seemed tantalisingly close. At other times humidity has been so great that even from our ‘top field’ the cliff edge has vanished along with the horizons between sea and sky and mountain that I know are there. Through the dazzling light it has been difficult to focus on anything without wearing cap and sunglasses. And threaded between the billowing waves of moisture, clouds of insect wings have captured sunlight, flashing and glinting, and adding to my eye-watery blindings. 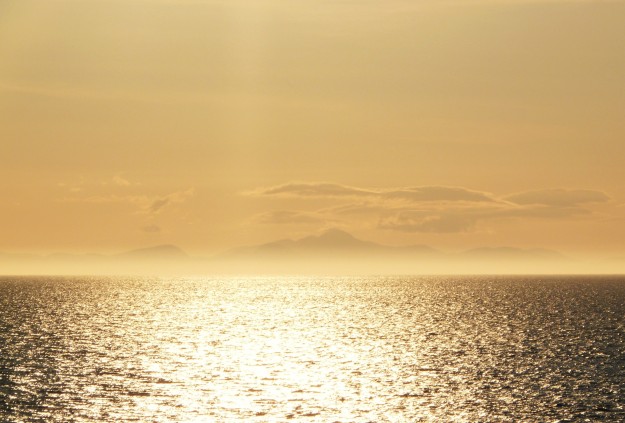 Reduced by the heat and almost hidden by greenery the Red River has trickled slowly over stones and rocky waterfalls creating an underwater world of glowing treasures: nuggets of gold and gemstones of garnet, beryl, ruby and citrine.

The farm tracks are dry, yet there has been a lot of rain and the river has risen and fallen several times in response to cloudbursts. Water flow, bound up in dense and luxuriant plant growth, soaks more slowly into peat and soil so the riverbanks have not yet been overtopped nor the ‘wet’ meadows flooded. Our fields are filled with colour and hum with life as the nodding grasses, sedges and wildflowers of every hue have responded to the alternating heat and moisture.

On damp days the land is draped in a bolt of silver and green cloth, as though St Brigid had travelled from ancient Ireland and spread her cloak across everything. Not even the high peaks are immune to her magic.

The growth of living biomass has been so great that my little daily pather around our fields is now marked by a narrow flattened ‘trail’, just two welly boots wide. It drops firstly down through our little patch of woodland, past the byre and out onto the lower flood meadows where it snakes along by the riverbank and around the margins of ditches; up then onto the peat bank, crossing back and forth over the (otter) burn and higher still to the drier ‘top field’. From here it passes through another gate onto the track that leads to the sea.

This route is so very familiar; its intimacies, each stone, stem and trickle of water, every nook and cranny, are known and loved. Some of this land I own and some of it I pass over and through each day. I feel a deep attachment to this place and a growing sense of ownership for the parts I don’t have a legal claim to. It is both a responsibility for and a belonging to, something the Welsh call ‘cynefin’, and a sensation I have not felt since being in New Guinea. But it may be even stronger than that. I am beginning to think the land now owns me.

Just as the trail has become a definite mark on the landscape it has been seared on my brain. What started out as a habit has almost become ritual; and I am beginning to sense reciprocity in my passing by, that nature is responding to me. As an intimate form of contact with this place, the walk is not destructive but at times constructive, through tiny acts of placing a shell here or a stone there, and in the response of plants to my trampling. Wildlife no longer flees from dog and me. The whole landscape is scribed with a mass of comings and goings, of people and animals, both wild and domestic, and by the passage of wind and water, so if I were to draw them out as a map it would look like an elephant’s skin, criss-crossed with lines, folds and creases.

While pathering I’ve placed stones, beautiful in their colours and stripes or glittering with crystal shards, on fence posts or by the trailside; we have decorated our sea-log bench with shells and dried bladderwrack and gathered curling pieces of drift wood to build a back-rest; I have woven grasses and rushes and twisted lengths of fishing ropes around wire fencing and collected sea glass to make mosaics on the rocks. In these small ways I’m leaving my mark at least for a time, until the wind or water moves them on, or a holiday-maker wants wood for a camp fire or mementoes of a wilder time. 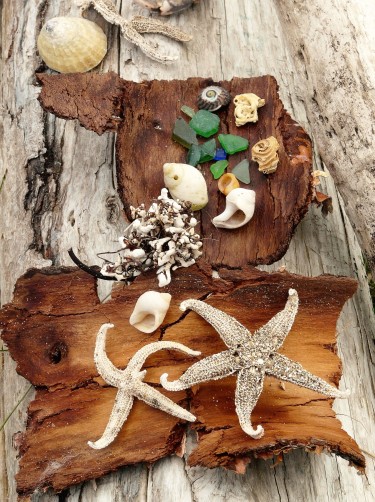 Wester Ross artist Lynn Bennet-Mackenzie, currently ‘in residence’ at Inverewe gardens, uses materials gathered on walks as artefacts for her creative interactions with nature and wilderness, and in her instalments that punctuate yet deeply empathise and resonate with the land.  Lynn is inspirational and her work rightly provokes strong reaction to landscape and notions of wildness. Occasionally I try to ‘arrange’ my little treasures into cohesive forms but whatever patterns or shapes emerge I’m convinced they have no meaning other than in the very act of placing them in a particular space. And I am no artist. I am sprainting like an otter, leaving my ‘treasures’ as tiny marks inside this place.

We have had friends to stay over the last few days. It has been a joyous though poignant time for one of our happy band is seriously ill. We were ‘talks-walking’ (thank you Robert Macfarlane*) and our meanderings were slow and gentle, our conversations and laughter energetic and loud. They had not visited the North West Highlands before so each turn of a corner brought fresh gasps and many musings about landscape scale in this wild country. As physical scientists we had long discussions about climate and environmental change and the methods we have all used together to try and elucidate the mysteries of the remoter past, and on how we try to navigate the relationships between people and nature. They stravaiged past the spraint mounds of otters and over my little treasured leavings, their faces raised to view wild seascapes and grand mountain vistas. And I realised then that my very particular path, this especially familiar route, has itself become so subsumed into the landscape that its delicate details and secrets and artistry are all but invisible to others.

Perhaps I am scientist no longer? I’m marking my territory in ways that only creatures of the wilds would see, or an artist might understand. 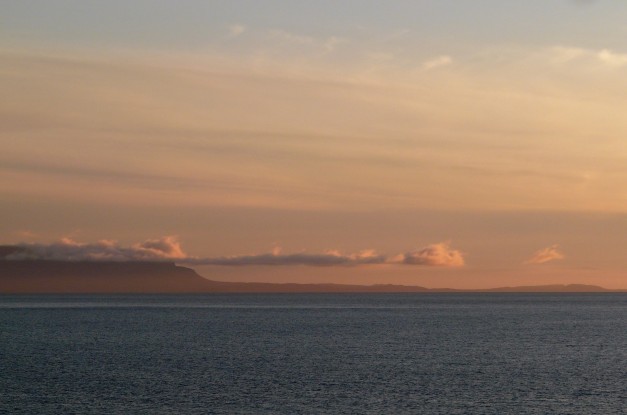 Hello there. I'm a mother, grandmother, writer, crofter & Professor of Physical Geography specialising in ‘environmental change'. I live on a smallholding known as a 'croft'. The croft is close to the sea and surrounded by the ‘Great Wilderness’ mountains of the NW Highlands. I was a fulltime mother, then a full-time academic living and working in north-west England. In 2013 we decided to try and live a smaller, simpler, wilder life in the remote mountain and coastal landscapes of Wester Ross. When I was a young researcher, I spent time in the Highlands of Papua New Guinea living with indigenous communities there. They taught me about the interconnectedness and sacredness of the living world. After having my four children I worked in universities continuing my research and teaching students about environments, landform processes and landscape change. Eventually, after 12 years, I moved away from the rigours of scientific writing, rediscovered my wilder self and turned to nature non-fiction writing. My work has been published by Elliott & Thompson in a series of anthologies called 'Seasons' and I have essays in several editions of the highly acclaimed journal ‘Elementum’, each one partnered with artworks by contemporary artists. I also still work with former colleagues and publish in peer-reviewed academic journals. I am currently writing a book about this extraordinary place which will be published by Harper Collins.
View all posts by Annie O'Garra Worsley →
This entry was posted in art, artists, encounters with wildlife, environment, experiencing nature, landscape, nature, nature writing, otters, photography, river, Scotland, sea, walking, wilderness, wildlife and tagged croft, meadows, otters, paths, Red River, summer, trails, walking, weather, wildlife, wildlife encounters. Bookmark the permalink.