For a few years I took groups of university students to Mallorca. It was both a privilege and a pleasure; hard work but great fun. Through fieldwork we investigated the island’s mountain and coastal landscapes and tried to piece together the natural and anthropogenic factors that contribute to their very particular character. Now with UNESCO World Heritage status, the high mountains and rugged coasts of the Serra de Tramuntana are remarkable and beautifully wild, yet they have a long history of human occupation. The limestone geology has exerted considerable structural control on landforms, soils and vegetation resulting in a unique landscape of serrated mountains and deep gorges. Over thousands of years people built stone terraces, complex water management systems, villages and steep footpaths; they managed woodlands and created groves of olive, citrus, almond and carob. Coupled with the Mediterranean climate it is a heady combination, a sensory salpicón. 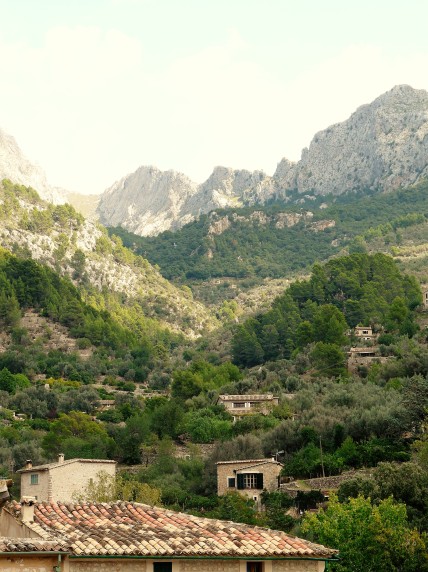 Our recent family holiday retreat (from Scotland’s damp winds and cold grey squalls) thus came as a blessing, a most welcome return visit. The contrast with Wester Ross could not have been greater: dry September heat and long days of sunshine squeezed resinous scents of pine and lemon from crisp leaves and wrung essences of Earth herself from rust-red and ochre soils. Fluted columns and serrated edges of limestone puncture the maquis and garrigue covered slopes while great bulbous overhangs and crags are stained by iron rich residues that testify to the movement of unseen water.

Over the past week I had not realised how much I missed limestone. Apart from the odd strangely weathered erratic abandoned by ice thousands of years ago there is no limestone near my Highland home. And yet it is a rock I know and love. From the great ramparts of Dun Aengus on the Arran Isles of western Ireland to the clinted and gryked platforms of north Lancashire, limestone induces a rather special and familiar sense of place. Stepping onto it feels comfortable, as if the rock actually knows me, more than I know it. From time to time I wonder if it recognises a long-standing legacy of association with limestone that is tucked away, inside my genetic coding. The O’Garras/O’Garas are from western Ireland’s limestone territory so that may partly explain it; they in turn, so it is thought, came with sea farers from the Mediterranean limestone regions. And in Spain there is even a village called Ogarrio.

So to be in Mallorca amongst the karst and olive groves is akin to a homecoming. Remembering happy fieldtrips with students studying the enormous ancient terraces, weird rillenkaren rock formations and strange plants, reinforces that feeling. There is much to be gained from books and in lectures but nothing compares to finding things out ‘in the field’. To see student faces light up with new found understanding and a delight that matched my own was one of the greatest pleasures of teaching. Limestone and happiness! The relationship I have with Mallorca and with limestone is therefore a complex, multi-layered affair, rather like the geology itself, and of course, those incredible terraces.

The Tramuntana range is home to forests of Holm Oak, Aleppo Pine and scented, resinous scrub as well as the geologic formations that would grace any fantasy novel or fairy tale. Some of the woodlands are very old; descriptions of oak woods and terracing in the Lluc basin appear in Roman texts. And so to encounter an ancient tree is to meet with an organism that knows things. But even expertise accumulated by years of study and research is humbled in the presence of a living entity that was elderly when King James I of Aragon (Jaume el Conqueridor) recaptured Palma in 1229. There are olive trees in the Serra de Tramuntana more than 1000 years old, many could be more than double that. They have survived on the high terraces because these places have been managed by people for thousands of years. Olives and olive oil production is at least 8000 years old (the pollen grains of domesticated olive appear in the sedimentary records from that time) and so it is highly likely that the process of domestication began long before that.

Every opportunity to see and touch (and hug) ancient olive trees feels like a blessing. Their gnarled and knotted bark ripples with the passage of time; the twisted roots and branches are testament to their understanding of and intimacy with rock, water and air; they are creatures of the elementals; they commune with the very fundamental essences of Earth herself, and with deep time. And yet they are also creatures of a human world; they need to be cared for, to have rock walls and water channels carefully engineered to ensure longevity and vitality. Therefore, just as communities know and understand olive groves, the trees also have close bonds with people and, I like to think, with their stories. Walk up through the ancient terraces of Lluc, pause now and then to listen to mountain breezes shuffling the leaves and you will hear voices from the remote past. They are stored in the curling, crinkled bark and if you sit for a while with your back to an olive’s trunk the storytelling emerges. Run your hands up and down its ‘skin’ and the living essence merges with your own. Before long heart and mind will be captivated and then you too will want to walk amongst them again and again. 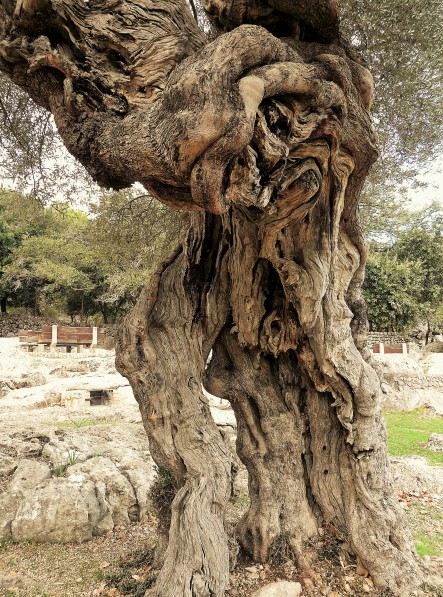 After being reunited with the ancient olives and terraces of the Serra de Tramuntana much of our holiday was spent by the sea.

The world is very different when viewed through the eyes of a five month old baby girl. But she experienced for the first time the vivid pinks of bougainvillea and bright oranges and yellows of the bean trefoil, and the dazzling blues of sea, sky and pool. She watched the tramuntana wind blow through the trees and vine leaves and heard the waves lap the pale dun sandy shore at Formentor. Will she remember the colours, scents and sounds? Maybe. Perhaps many years in the future she will step onto a Mediterranean island and it will feel like a homecoming of sorts, and she will remember breathing in the rich, dry air of the olive groves as she was carried by her grandmother.

Now I am home. Through the window I can see that the land has been burnished in the short time I was away. Grasses have been dipped in copper, heather blooms in pewter. Pale gold pennies from silver birches float in the wind and orange larch needles blanket the roadside. Beyond the croft the sea is the colour of Mallorcan limestone, waves are crested and fluted like rillenkaren, and I am sure that the salted air has just blown faint scents of lemon, olive and red earth in through the open door.

Hello there. I'm a mother, grandmother, writer, crofter & Professor of Physical Geography specialising in ‘environmental change'. I live on a smallholding known as a 'croft'. The croft is close to the sea and surrounded by the ‘Great Wilderness’ mountains of the NW Highlands. I was a fulltime mother, then a full-time academic living and working in north-west England. In 2013 we decided to try and live a smaller, simpler, wilder life in the remote mountain and coastal landscapes of Wester Ross. When I was a young researcher, I spent time in the Highlands of Papua New Guinea living with indigenous communities there. They taught me about the interconnectedness and sacredness of the living world. After having my four children I worked in universities continuing my research and teaching students about environments, landform processes and landscape change. Eventually, after 12 years, I moved away from the rigours of scientific writing, rediscovered my wilder self and turned to nature non-fiction writing. My work has been published by Elliott & Thompson in a series of anthologies called 'Seasons' and I have essays in several editions of the highly acclaimed journal ‘Elementum’, each one partnered with artworks by contemporary artists. I also still work with former colleagues and publish in peer-reviewed academic journals. I am currently writing a book about this extraordinary place which will be published by Harper Collins.
View all posts by Annie O'Garra Worsley →
This entry was posted in archaeology, beaches, Formentor, karst, limestone, Lluc, Mallorca, Mediterranean, Mediterranean holidays, Mediterranean vegetation, olive groves, olive trees, rillenkaren, Serra de Tramuntana, terraces, university teaching and tagged beach, coast, coasts, geology, karst, landscape, limestone, Mallorca, Mallorca mountains, Mediterranean, Mediterranean vegetation, mountains, nature, olive trees, sea, terraces, weather, wilderness, wildlife. Bookmark the permalink.