One hour, one shower, altered perspective.

Along this small frisk of marginal land, sandwiched between high mountains and deep sea, an old path has been re-established by our footsteps. For me it has become a prayer walk, a cleansing-of-the-mind pather, from croft home to sandy beach via a very old route called the “seaweed path”. As it descends diagonally down the low cliff the track has disintegrated in places though it was once wide enough for a pony and cart. It was used by crofters for access to the shore so they could harvest kelp and other species for use as fertiliser on the fields. Much of the original route is now criss-crossed by the braided streams of otter runs and deer trails that flow between patches of machair and rocky outcrops but the clever use of edging stones can still be seen poking out of the green turf here and there. I am accompanied always by Dram-the-dog and often by my husband striding ahead, his extra twelve inches of height stretching out in the long lopes of a mountain man.

One day this week I set out, a forecast of ‘showers from the north’ fresh in my mind. From the cliff top I could see a rivière of showers running along the Hebridean horizon, each one pleating with the high points of Lewis and Harris and eventually swirling across the Quiraing on Skye. I watched for a while getting the measure of their speed and direction, and then set off towards Opinan. With a low tide the beach sands were sloped and as smooth as a newly plastered wall. There were no footprints or animal trails. At the far end of the bay a cluster of ringed plovers riddled back and forth in between scraps and wisps of bladderwrack, chasing wavelets. 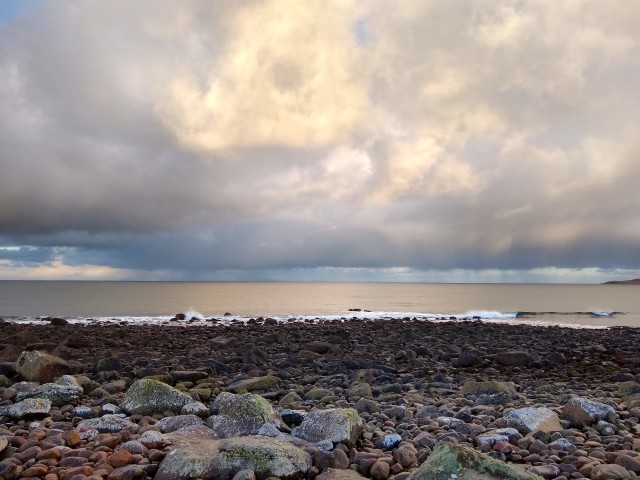 In the relative shelter of this small curve of coast the sea was calm and shone as if newly polished. Further out wave crests were curling upwards in the winds. To the north beyond the westernmost tip of Longa Island, a band of grey was fragmenting with short, broad rainbows that seemed to grow as I watched. A rogue shower had broken off from the Hebridean necklace and was heading towards us, growing quickly, driven counter intuitively and in contrast to the main plough of storm-clouds. Its outlying thrusts quickly expanded high over my head.

The outer edges of this rotating mass of cloud were radiant and below its centre the sea transformed from steely-blue to pale yellow-green milk, flattening and glowing more as the colour changed. The ‘storm-cell’ churned with energy. Trails of rain or snow emanating from its outer edges were now immediately drawn back inwards. There was no sound and no wind, only a deep, bone-aching chill as if the physical properties of this singular cloud (temperature, rotation, precipitation) were its own and unconnected to any aspects of the surrounding atmosphere.

The gelid air quite was still and yet despite the apparent atmospheric and oceanic motion before me, I could hear nothing, and sense nothing but the dimensionless cold. An alternative universe was presented in the bright reflective sea and gleaming wet sands; up became down, east flipped west, and under turned over. A portal to a mirror-world had opened and we had stepped through, dog and me, dissolving into another space and time. And I realised in that moment just how little of my earthly home I truly know and understand, for all my years of living.

The still-flat sea became a mirror reflecting the cloud’s shape, density and internal luminosity.  It appeared to have a life and creaturely purpose all of its own, moving at running speed and trailing behind it another space in which all traces of the sea’s opaque biliousness vanished in a sweep of blue, silver, white and grey. Gradually the distant chain of showers moving through the Hebrides began to reappear until they too were reflected in the newly gleaming surface of the water.

The storm-cloud ran away, the flat calm disintegrated. The whole sequence of arrival and dispersal lasted only an hour yet in that short space of time it seemed that atmosphere and ocean had engaged in a very particular conversation, one so utterly removed from my own small, human mind that I simply could not comprehend it other than to recognise that some kind of communion had taken place.

Our sun flared and restored colours, scents and sounds; the air warmed. Dog dashed into the returning waves. Sea birds yelled at one another and I followed the cluster of ringed plovers as they began once more to peep and run about.

I stepped up from the sands onto the bright green grasses over which midges danced, their wings catching the yellow warmth of the morning sun and headed home.

Hello there. I'm a mother, grandmother, writer, crofter & Professor of Physical Geography specialising in ‘environmental change'. I live on a smallholding known as a 'croft'. The croft is close to the sea and surrounded by the ‘Great Wilderness’ mountains of the NW Highlands. I was a fulltime mother, then a full-time academic living and working in north-west England. In 2013 we decided to try and live a smaller, simpler, wilder life in the remote mountain and coastal landscapes of Wester Ross. When I was a young researcher, I spent time in the Highlands of Papua New Guinea living with indigenous communities there. They taught me about the interconnectedness and sacredness of the living world. After having my four children I worked in universities continuing my research and teaching students about environments, landform processes and landscape change. Eventually, after 12 years, I moved away from the rigours of scientific writing, rediscovered my wilder self and turned to nature non-fiction writing. My work has been published by Elliott & Thompson in a series of anthologies called 'Seasons' and I have essays in several editions of the highly acclaimed journal ‘Elementum’, each one partnered with artworks by contemporary artists. I also still work with former colleagues and publish in peer-reviewed academic journals. I am currently writing a book about this extraordinary place which will be published by Harper Collins.
View all posts by Annie O'Garra Worsley →
This entry was posted in beaches, clouds, coasts, encounters with wildlife, environment, landscape photography, nature, nature writing, photography, Scotland, sea, Skye, storm, weather, wilderness, winter, winter weather and tagged coast, landscape photography, nature, storm clouds, winter weather. Bookmark the permalink.

6 Responses to One hour, one shower, altered perspective.